Hackathon for Peace, Justice and Security

Graphic style and signage for a two-day event.

A short and sweet case: we were asked to design a fresh and flexible style for the Hackathon for Peace, Justice and Security over a period of just a few weeks.

Overarching organisation Data Science Initiative invited us to create a small visual identity and signage for this special and inspiring hackathon. Over a short period of time, we made a series of materials, from a huge 10-metre-wide window sticker to coffee mugs. To ensure the signage was sustainable, we created a playful, modular system consisting of 150 stackable cubes that function as signs and indicate spaces. They can also be implemented easily at a next edition.

Even before we were commissioned for the visual identity and signage, there was a starting point of three icons for peace, justice and security. We developed these icons into a grid of dots that in turn forms a starting point for many new icons suitable for signage. Among these are the icons we creates for activities, toilets, shower rooms, dorms and so on.

The Hackathon for Peace, Justice and Security 2018 was the first prominent project by the Data Science Initiative. The second edition took place in June 2019 at the new The Hague Tech building. A manual was developed in October 2019 so that this successful concept can be rolled out open-source to other cities. Interested? Request it here!

Want to work together? 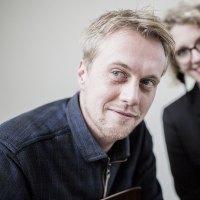 Visual identity for a farm that is pioneering in regenerative agriculture.